Southwest Airlines Co. is a major United States airline and the largest low-cost carrier in the world headquartered in Dallas, Texas on the grounds of Dallas Love Field.

The airline was founded in 1967 as Air Southwest by Herb Kelleher. In 1971 it adopted its current name after beginning operations as an intrastate airline within the state of Texas. Currently, Southwest Airlines has more than 55,000 employees and operates over 4,000 departures per day during peak travel season. The airline has scheduled services to nearly one hundred destinations in the U.S. and 8 additional countries.

Southwest Airlines has operated only Boeing 737 jetliner, except for the period 1979-1987 when it leased a number of Boeing 727-200s from Braniff International Airways. Southwest has been the largest operator of Boeing 737 worldwide since January 2016, with more than 700 in service, each averaging 6 flights a day.

The airline has employed humor in advertising. Its slogans include "Just Plane Smart," "Love Is Still Our Field," "The Somebody Else Up There Who Loves You," "THE Low Fare Airline," "You're Now Free To Move About The Country," "Welcome Aboard," "Grab your bag, It's On!." The current slogan of Southwest Airlines is "Low fares. Nothing to hide."

Southwest Airlines is popular for colorful boarding announcements as well as crews bursting out in song, which is appreciated by passengers. 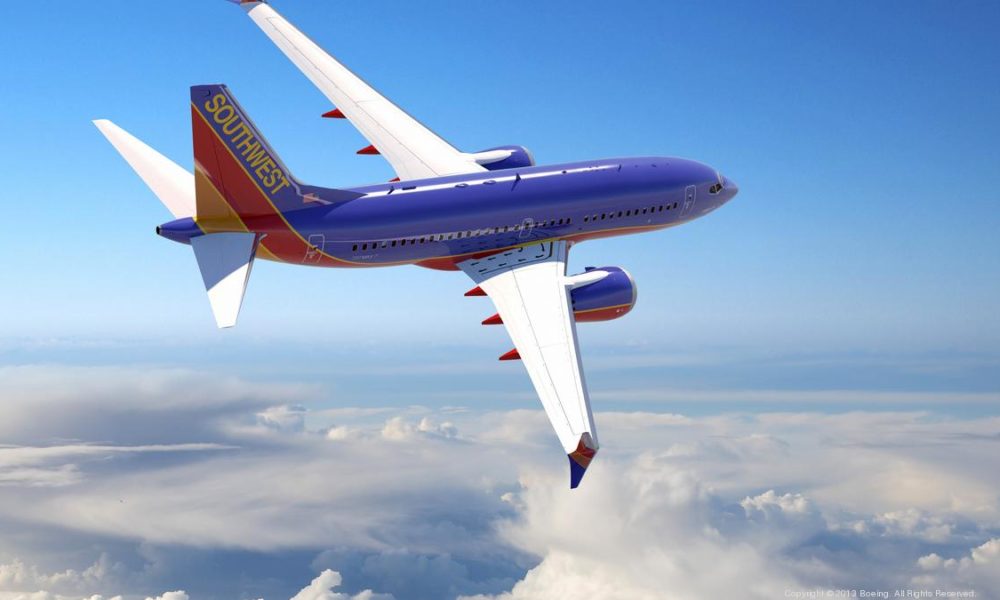 Southwest has scheduled flights to more than 100 destinations in more than 40 states, Central America, Mexico, Puerto Rico, the Caribbean. The airline operates crew bases at the airports: Houston–Hobby, Chicago–Midway, Dallas–Love, Atlanta, Baltimore, Denver, Las Vegas, Phoenix–Sky Harbor, Oakland, Orlando. Southwest Airlines does not use the system "hub and spoke" of other major airlines, and prefers the system "point-to-point", combined with the "rolling hub" model in larger cities.

Southwest Airlines first class does not exist. There are various ticket classes passengers can choose from, but remember that Southwest-operated flights feature open seating. Once onboard, passengers have to choose any available seat.

Onboard entertainment consists of a live TV feed. Wi-fi is available on select flights for a fee. 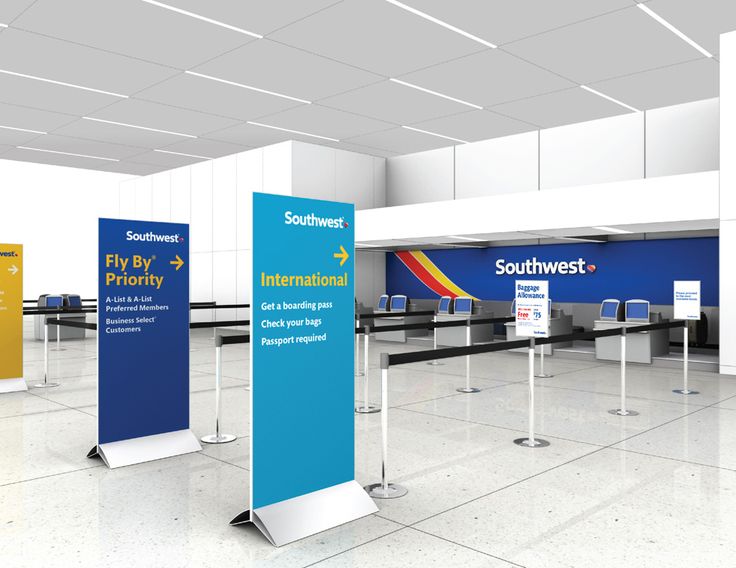 As the only domestic carrier in the United States allowing 2 free checked bags per passenger, Southwest Airlines boasts with its "Bags Fly Free" program, and no traveler has to deal with nuisance of additional baggage fees because those costs have been factored into the fare. With a Southwest Airlines ticket, passengers get to bring one personal item (small backpack, laptop, camera case), a carry-on bag, and 2 checked bags for free.

When you buy a ticket on Southwest Airlines, you won’t be given an option of choosing a seat. Actually, no one onboard the airplane will have seating assignment printed on the ticket. The Southwest Airlines boarding process is unique. Passengers are given a boarding number when they check in to the flight (24 h in advance). Those who check in right at the 24h mark receive better boarding numbers.

Southwest Airlines does not sell food onboard but serves complimentary coffee, cold drinks and juices on all flights. Alcoholic beverages are available to purchase at a flat rate of US$5 per beverage. Rapid Rewards members receive drinks vouchers together with their tickets. Free alcohol is offered on popular holidays like Valentine's Day, Mardi Gras, and New Year's Day, provided the passenger is at least 21-year-old. 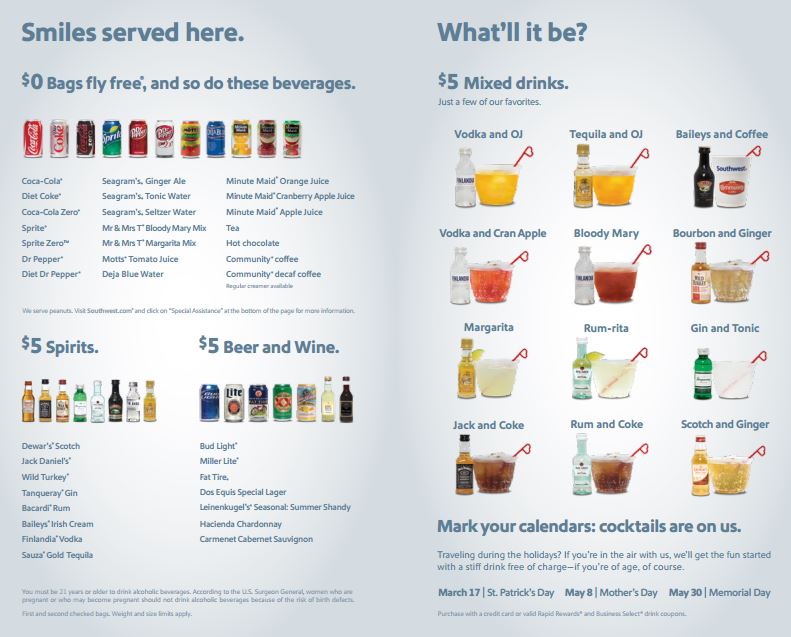 Southwest Airlines offers complimentary pretzels or peanuts on all flights. In case the itinerary includes nonstop flight longer than 2 hours, passengers are served packaged snacks on that flight segment. Southwest does not serve meals or sandwiches, but clients may bring something to eat on board. Better pack a meal or stop by airport's concession stand and bring it onboard.